Today things have changed, but the Crema Marfil is still a reference marble in the world. Below we introduce you to the well-known Crema Marfil marble.

The Crema Marfil marble is mostly explored in the area around the town of Pinoso – Spain. The quarries are considered of large dimension, both in the Coto and Zafra areas, where the two main varieties of Crema Marfil are explored. The Coto variety is explored by several quarries that are all located in the same hill; while the Zafra variety is explored by very few quarries. There are also some alternative types of Crema Marfil extracted in other areas. The blocks extracted are normally of large dimension for slabs and smaller dimension for tiles. 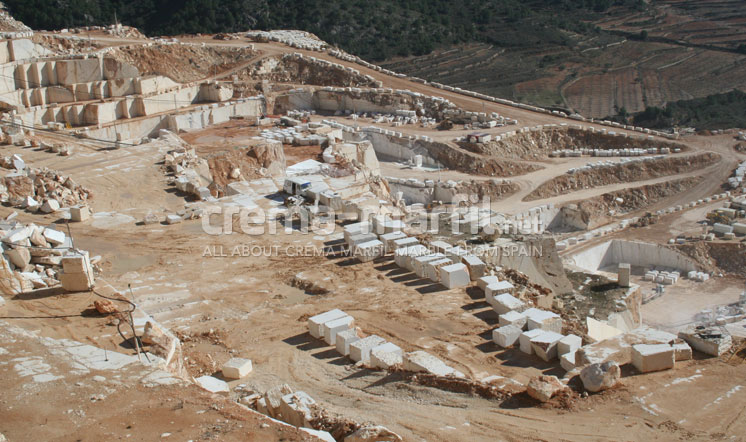 There are currently several variations and also names given for the Crema Marfil marble. Despite this, the two most relevant and well-known types of Crema Marfil available in the export market are:

– Crema Marfil Standard: this is a light-beige yellowish coloured marble, with uniform background. It presents some occasional irregular vein and very few signs of fossils. This is a high grade Crema Marfil with considerable supply capacity.

– Crema Marfil Commercial: this is a light-beige yellowish coloured marble, with uniform background. It presents several irregular vein, some calcite and may present strong signs of fossils. This is the commercial type of the Crema Marfil, with large supply but also demand. It has a very competitive price.

The Crema Marfil variations depend mainly on the tonality on the light beige colour that can be lighter or darker, as well as on the intensity of its vein. There are currently several grades in the market, ranging from First to Basic, but these are the most common and available ones, with a good price-quality relation.

The Crema Marfil is a marble that can accept a good range of finishings. Despite this, it is common to find few finishings in the market for this marble. We present some of these below:

– Polished: by far the most common and popular type of finishing. The polished finishing highlights what is so demanded on this marble, the uniform beige colour.

– Brushed: it changes slightly the natural colour of the Crema Marfil, but adding an anti-slippery property to the surface and a certain rustic look.

– Bush-hammered: a rough type of finishing that changes the surface of the limestone into a lighter Crema Marfil.

In addition to these finishings, some other mainstream finishings are the tumbled, honed or sandblasted.

The Crema Marfil marble can be found pretty much in any market where there is natural stone sales. It is perhaps the most mainstream natural stones, which is part of most company´s catalogues. Despite this massive market reach, there are few market worth mentioning due to its volume and demand:

– China: it is probably the largest stockist of Crema Marfil in the world. China has been buying massive volume of blocks from Spain and transformed into slabs. Today, they are a major player for this marble. China still is a major importer.

– Middle East: probably the second largest market after China, most Middle East countries import large quantities of Crema Marfil slabs and tiles. It is a preferential marble to be combined with Dark Emperador in projects all over the Middle East.

– Emerging economies: such as Russia, Brazil, Mexico and so on. These countries have just started on the wave of importing Crema Marfil for many reference projects.

– Europe and USA: these two blocs used to be the major market. They are now market for second grade Crema Marfil, as the first grade goes mostly to China and emerging economies in larger quantities.

As a mainstream marble, the Crema Marfil has probably been used on every possible natural stone application. However, we would like to point out some recommended applications where this beautiful marble can be very suitable. Some of these applications are:

– Flooring: where it combined in perfection with other coloured stones such as the Dark Emperador or Rojo Alicante.

– Interior decoration: such as basins, fireplaces, coverings and much more. The uniform beige colour and stylish look makes the Crema Marfil a preferential marble for such uses.

There are numerous variations of Crema Marfil marble available in the…

The Middle East is an incredible market for marble supply, being at th…

Spanish marble are popular to be used in combination with each other,…